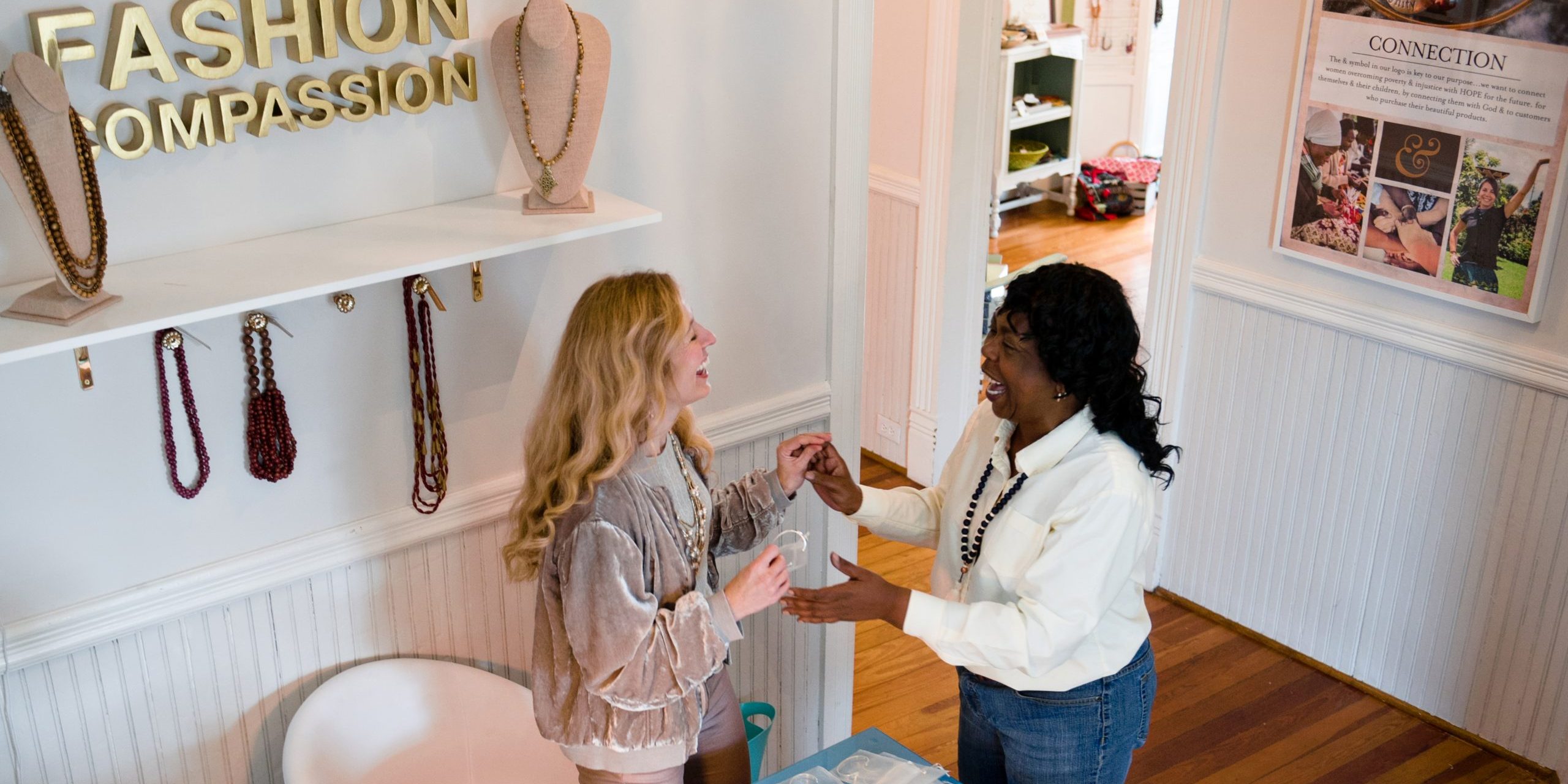 I have had the privilege of working with Fashion and Compassion as a lead partner with Social Venture Partners for close to a year now. I’ve been led to share what I’ve seen during that time because my reason for offering my time, talent and resources has been transformed during my time spent with this organization. When my husband, Jim and I learned about SVP, we were intrigued by the model of actually serving in the nonprofits where we were giving our money. This seemed to be more meaningful to us—rather than just writing a check, we had more ownership in the output of a nonprofit and this was very rewarding.

Fashion and Compassion serves marginalized women through offering temporary employment in jewelry creation. These women come from backgrounds of human trafficking, physical abuse, substance abuse, homelessness or persecution in countries around the world. Jewelry projects take place in a few different locations around Charlotte. I was privileged to attend a project with refugee women one Friday in the winter at Project 658 on Central Avenue. I entered into a room that was full of lively chatter in many different languages. These women, dressed in their native dress, complete with head coverings, were busily working on the jewelry. The room was beautiful to behold, and the sights and sounds were something that I wasn’t accustomed to in South Charlotte. I could hardly believe that all this was going on in my city.

I had only been there for 10 minutes when an African woman spoke in a loud voice in her language to the whole group. She was beckoning all of us to join her in the back of the room. There was a woman there who could interpret for her and she said that the woman did, indeed want all of us to stand up and follow her to the back of the room. When we obeyed and followed, the interpreter said that the woman just wanted to praise the Lord and wanted us to join her. Everyone willingly joined in and clapped their hands and listened in as the interpreter shared what the woman was saying. It was a very joyous time. After that, the group sat back down and Michele Dudley, Fashion and Compassion’s Executive Director announced that shortly we would be gathering around one table to have a discussion.

Once a little more work was completed, Michele gathered the group together and opened up a discussion about God. Many women were not shy to share, and in fact, it seemed to me that they were hungry to share. Most all of these women lived isolated lives. It is amazing what the building of community will do in tearing down walls amongst those in isolation. Two topics to shy away from in American culture are politics and religion—especially amongst people who don’t know each other very well. These women were speaking in at least three different languages. Each language spoken had an interpreter so that we all could understand what was being said. Each woman who shared had a concept of God and wanted to share her view, and in turn, each experienced the gift of being heard and respected that morning. Again, I felt that I was exposed to something special and nourishing in that space. I felt that I walked out being replenished and feeling stronger than when I went in as my community became a little larger.

As we seek to give back to Charlotte through SVP, it is a real gift to be exposed to the diverse people who make up our city. We are very privileged to be in positions that craft policy that affects these people. Exposure does wonderful things for us as it puts a face to a to a formerly nameless group of people. Perhaps more importantly, exposure causes us to walk away changed, enriched by the experience and strengthened in our resolve to help, as we ourselves have been helped.