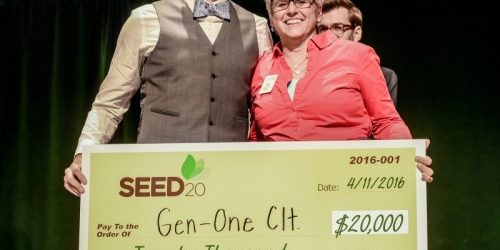 Listening to a story being told at a SEED20 Alumni event recently, we asked Ian Joyce, grand prize winner of SEED20 last year, to share his most recent experience:

As both executive director of Gen-One Charlotte and an 8th grade social studies teacher responsible for educating 110 students about the complexities of U.S. History, it is needless to say that I am usually strapped for time. Most days, I fly by the seam of my pants. It looks something like Wile E. Coyote (me) and The Road Runner (my responsibilities).

Each week, I am lucky to just catch up to the Road Runner and come up for air. If it was a really good week, I get enough time to faithfully date my wife. I think I speak for most executive directors in Charlotte when I say that many of us are also the director of social media, the director of volunteers, the organizer of events—and last, but certainly not the least—director of development and fundraising.

Winning SEED20 last year came as a complete shock to me. SEED20 does such an incredible job coaching and recruiting non-profits in the area, that it is no wonder many of them go on to be successful. To say the least, we were humbled to win; but to speak the truth, we have been more impacted by SEED20’s effect on our organization’s future. Our program is in its pilot year. When we began SEED20, Gen-One Charlotte was just a good idea on a roll, gaining steam and about to become official. By the time SEED20 ended, we somehow had $20,000 in our bank account, a focused mission statement, and best of all, a platform and loudspeaker for the future.

I was sitting at my desk last week [when an] email popped up. “Hey Ian. I was Googling non-profits in the area that would be good to contribute to. I’m relatively new to Charlotte. I saw your [SEED20] video online. I want to contribute. Can we meet up?”

I sighed. Another meeting. I really didn’t feel like I had time for it. The Road Runner was fast ahead, and this felt like a classic Road Runner illusion that was sure to put me over a cliff.

I emailed back reluctantly and set up a meeting at NoDa brewery for the end of that week. Denver* was kind enough to treat me to a few, and we connected immediately.

Like usual, we connected personally first—discussed why NoDa was our favorite brewery. Denver worked at an investment bank uptown, and has been dying to get involved with a non-profit he was passionate about.

As we discussed Gen-One Charlotte, how it started, where it was now and what we needed, we were two hours down. As Denver went up to pay, he casually said, “Oh I almost forgot, here you go.” Out of his dress shirt pocket came a $3,000 check. I think he heard me gasp audibly (I didn’t ask if he did).

It was perfect timing, because we were in need of more funding to take our 20 Gen-One Scholars to a play uptown and to organize a trip to Duke University. He filled serious fiscal needs, and I really didn’t do anything (nor would I have had the time to, most likely). SEED20 did the work for me.

This is not “the everyday routine” by any stretch of the imagination, but all in all, we have had over $15,000 additional contributions because of the SEED20 event, video, network and press that came after it. Whether you are a donor or member to SVP and SEED20, or whether you are a past, present, or future SEED20 participant—know they mean what they say when they tell you that you matter, and the best part of SEED20 comes after the event.

I cannot thank you enough if you are a supporter of the SEED20 on-stage event, a SEED20 or SVP board member/staff, or an SVP member. Truly, without you all, the work of creating equitable college access for first generation students in Charlotte’s public schools would not be happening.

So it would seem that, for one evening, Wile E. Coyote got the last laugh before the Road Runner took off again—and for that, I am thankful.