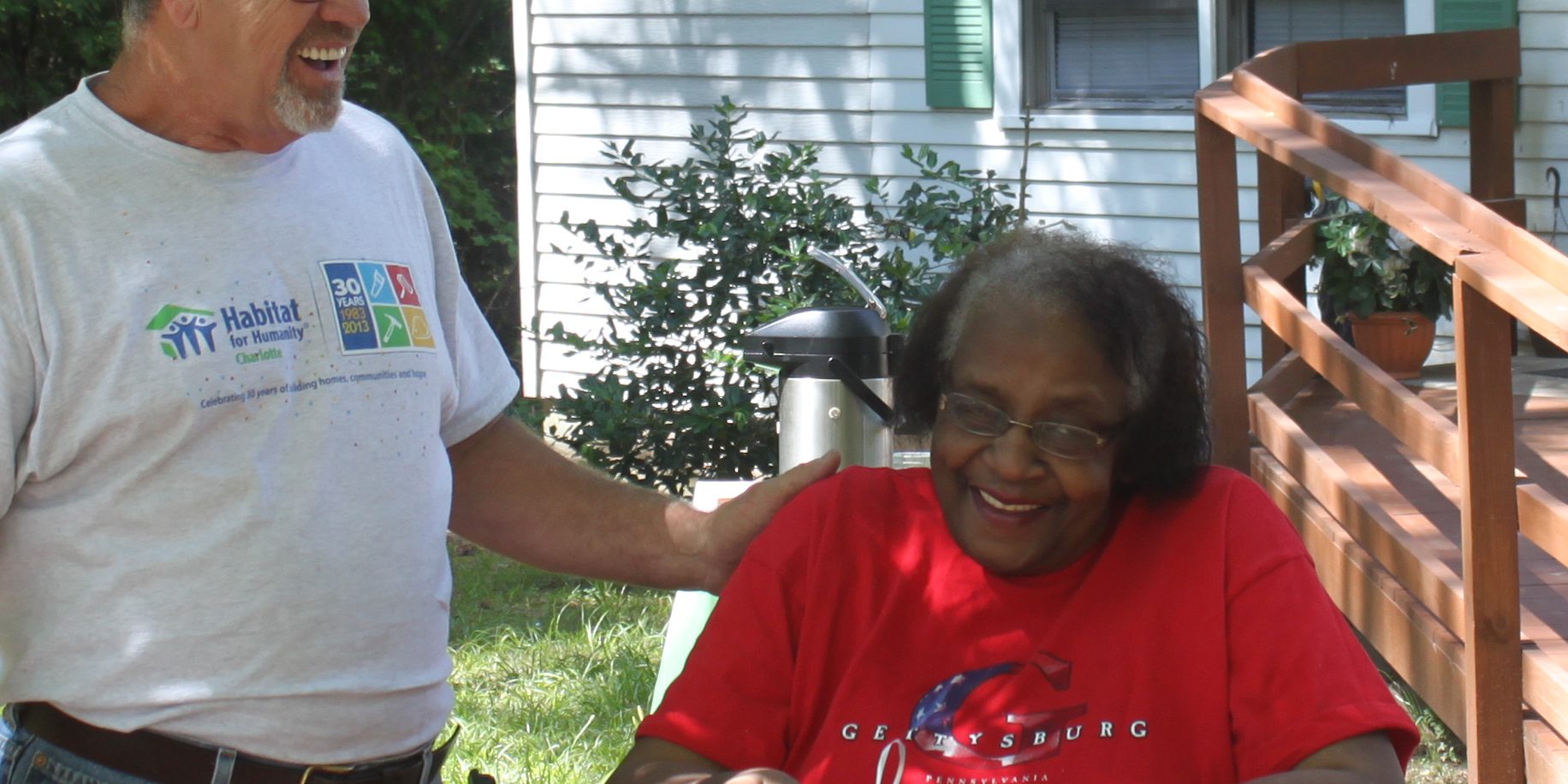 In 2009, SVP learned about a new program serving older homeowners in Charlotte. The Critical Home Repair Program at Habitat for Humanity (HCHR) was built to preserve affordable housing and primarily served older Charlotte residents with fixed incomes and mortgages on houses in varying states of disrepair.

“We would be building a new house on an infill lot and just couldn’t ignore the obvious problems with some of the older homes on the street,” adds Habitat Charlotte President and CEO Laura Belcher. “Older folks were living there and they didn’t have anyone to help them. So, we strapped on our tool belts and went to work. It’s what we do.”

Shortly after finding out about HCHR, SVP invested in the program.

“HCHR offered something unique during the recession,” said SVP Partner Scott Bengel. “It was more affordable for donors and a less costly way to serve families. The program director Tim O’Neill was a great entrepreneur; he just needed support to implement his ideas.”

When SVP came in to support HCHR, program director Tim O’Neill’s greatest need was building the program’s sustainability. A core team of SVP Partners committed themselves to the task. Bengel came on board in 2010 after the first full year of the partnership. “SVP thought my combination of financial understanding and the construction industry was prime for me to participate,” Bengel said. These instincts proved correct—Bengel eventually moved into the role of board chair for Habitat Charlotte. He still holds the position.

Along with Partners Debbie Kemmy, Marinn Bengel, Jack Locke, Andy Cooney and the rest of the SVP team, Bengel created a multi-year strategic plan for HCHR that fit within Habitat Charlotte’s overall board strategy. They re-priced the program to make it more affordable for the homeowners it served, codified procedures, and helped Habitat staff evolve the program into a coordinated effort with city funding.

“We talked with other affiliates that used public money and found new ways to run the program. The city was doing this work but not setup for it; we were doing the program and needed funding,” Bengel explained.

“The program went from a silo within HFH to eventually becaming integrated across all functional areas in HFH,” Bengel said. “Construction now trains their staff in both new and renovated houses, and Family Services now handles all the ‘underwriting’ of HCHR families (in addition to families having new homes built for them).”

Along with the rest of the Partners on the HCHR team, Bengel agrees that the fit between SVP and the program was natural. “Habitat Charlotte likes to innovate, and this program was one of the innovative programs created during a recession when other programs were not available,” he said.

Habitat Charlotte Communications Director Phil Prince agreed. “Charlotte’s a very innovative affiliate,” Prince said. “We are the first to formalize, brand, and expand the CHR service into a significant program within our affordable housing ministry. Our template has since been emulated by other affiliates, and continues to be, both here and overseas.”

The HCHR program also inspired another new program, first initiated by Habitat Charlotte, that is also being adopted across Habitat International—the Neighborhood Revitalization Program. “It grew out of the critical home repair program,” Prince affirmed. “Many of our new-construction homes were built in neighborhoods dotted with old houses in pretty rough shape, so we began to look at the neighborhood as a whole, and our vision broadened quickly,” Prince said.

Habitat Critical Home Repair figures have increased from 3 home repairs in 2008 to over 60 in fiscal year 2014.

“Ultimately, watching with satisfaction when a family or elderly homeowner are able to stay in the home where they have memories was so rewarding,” Bengel said.

“It’s a great way to help people age in place,” Prince agreed. “We have so many wonderful stories.”